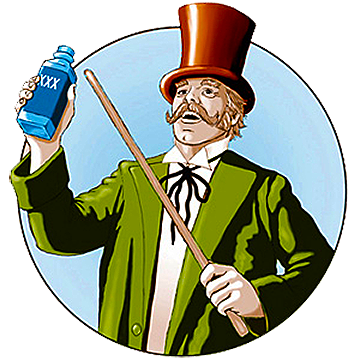 It’s fair to say that many website owners view search engine optimization (SEO) practitioners as little more than snake oil salesmen and when a reasonably respected website comes out with an unsubstantiated article titled WordPress Sucks: Impress Search Engines With These Alternatives the status of professional SEO practitioners takes a severe battering.

While link baiting is a common SEO tactic, readers drawn to a respected website that professes to publish information for SEO professionals due to a sensationalist headline expect to find balanced reasoning to support the “hook”, and not a lame, half-arsed opinion bereft of facts.

This sadly was not the case last Friday when Search Engine Watch (SEW) published WordPress Sucks: Impress Search Engines With These Alternatives by Gary-Adam Shannon, which kicked off with the claim that search engines are penalizing WordPress sites because of “security vulnerabilities, hacked themes, exploits, and all sorts of madness.” 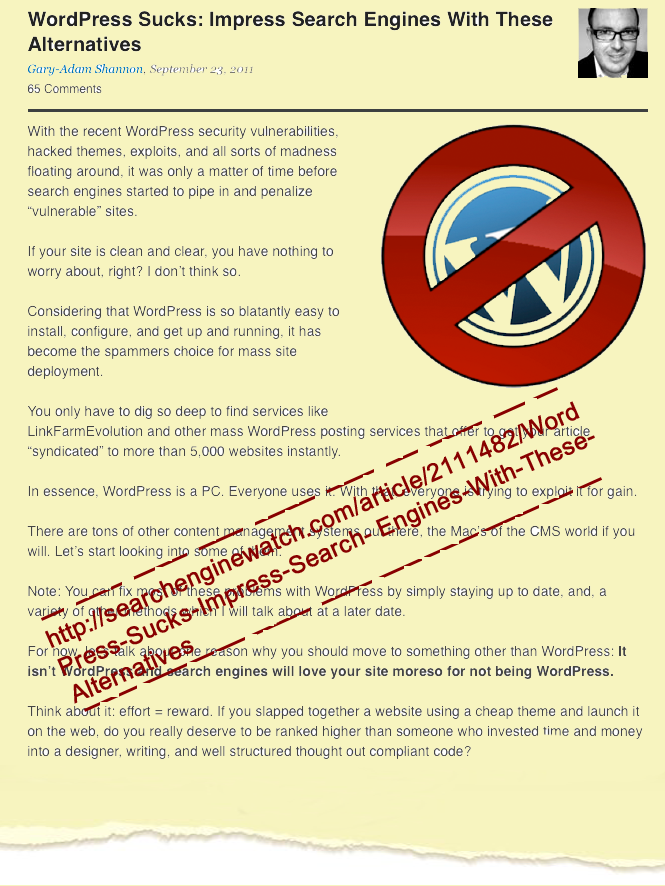 Citing WordPress-based link farms and scraper sites as also being to blame, Mr Shannon then goes on to claim that a good reason for website owners to move to WordPress is that “search engines will love your site moreso for not being WordPress”.

In Website 101: Traditional website or CMS? we looked at content management systems (CMS) such as WordPress, noting that since its launch in 2003 it has grown to power more than 20 million free-hosted WordPress.com websites, while up until February 2011 WordPress 3.0, which was released on June 17, 2010, had been been downloaded more than 32.5 million times.

According to W3Techs Web Technology Surveys WordPress dominates the CMS website market with 54 per cent of CMS-based websites using WordPress, well ahead of it nearest rival Joomla, which commands a market share of just 9.8 per cent.

With Mr Shannon’s sole attempt at justifying his claim being limited to, “effort = reward. If you slapped together a website using a cheap theme and launch it on the web, do you really deserve to be ranked higher than someone who invested time and money into a designer, writing, and well structured thought out compliant code?”, it’s not surprising that WordPress Sucks: Impress Search Engines With These Alternatives was rapidly leaped on by website owners, developers and SEO practitioners demanding concrete proof of the claims.

An example of some of the comments posted in response to the WordPress Sucks: Impress Search Engines With These Alternatives story are:

Not too jaded, are you? Seriously, seems like WordPress is only the enemy these days to those who feel they still need to build everything by hand to justify a bloated fee. Swallow your pride, get with the times and lose the hate. WordPress is only vulnerable when not updated on time or installed by a novice. ~ John Kelly

This article lacks any sort of content other than “WordPress sucks”. Pathetic attempt towards link baiting indeed. Here is an idea: when you say WordPress sucks, don’t list 6 other options and then say things like “Easy to use, flexible, feels like WordPress”. Really? Then why not just stick with WordPress and keep it updated. Your article title worked: I clicked on it. But your content is really what sucks. ~ Chris

Really disappointed in Search Engine Watch. As everyone else has said, this is a “pathetic” attempt at link baiting. What is this, TMZ? ~ Tony Zeoli

But this article is just pure BS. You are no better than the people you accuse of using WordPress for… well… what you just did: link baiting.

I *NOT* a WordPress user, and far from being a fan. I prefer other more sophisticated tools, but that does not mean I don’t like or respect the excellent job behind WP.

What I DONT RESPECT is people like you that just trow this bombshells, just to have an audience, in same way kids scream to get other people’s attention.~ Alexandre Paulo

In response to the flurry of outraged readers who felt they had been well and truly link-baited and that Mr Shannon’s suggestions of CMSs such as OctoPress, Jekyll, Textpattern, MovableType, or FeinCMS,were more than slightly obscure, SEW attempted to justify the original articles with half-arsed excuses such as:

“This article might not be ‘brilliant’ but it’s thought provoking and was enough of a contrary perspective to the mainstream that we felt it had value and SEW is not a team of journalists. SEW is written by practitioners for practitioners.

“The search industry is rife with anecdotal evidence and speculation. This article is no different and makes a valid argument – Google doesn’t like vulnerable sites, WordPress is vulnerable, so there is a risk of using WordPress if your goal is to rank highly”, again without a single piece of evidence  to support the claims.

That WordPress websites get hacked is not disputed, so too do ZenCart, Joomla, and every other CMS, or development environment you care to name. What is also not disputed is that there are numerous plugins such as BulletProof Security and other methods to keep your WordPress installation secure.

Making a statement such as “WordPress Sucks“ and that “search engines are penalizing WordPress sites because of “security vulnerabilities, hacked themes, exploits, and all sorts of madness” is akin to picking the best selling automobile in any given market and saying they are involved in more crashes than a make with lessor market share and totally ludicrous.

If one accepts the explanation that Google and other search engines penalize vulnerable sites, the recent attacks by groups such as Anonymous on large corporate websites, or by foreign gangs of hackers on US Government websites, it surely won’t be long before those much sought after backlinks from .gov and .edu sites are watered down due to these websites being classified as vulnerable.

Likewise if WordPress Sucks: Impress Search Engines With These Alternatives has any basis it’s hard to imagine why Google SEO guru Matt Cutts continues to use WordPress as his blogging platform, while the PR 5 rank of his Matt Cutts: Gadgets, Google, and SEO blog would tend to dispel claims that “there is a risk of using WordPress if your goal is to rank highly”.

That SEW and Gary-Adam Shannon’s reputation have taken a serious battering with such an unsubstantiated claim as “search engines will love your site moreso for not being WordPress” is without dispute, while unsubstantiated claims such as this also do little to help the reputation of professional SEO practitioners who work hard and achieve measurable results for their clients.

At Pattaya Web Services we pay close attention to the latest developments in internet security and recommendations from Google and to date there has not been a single indication that Google is penalizing any website because of the development system used, whether those websites have been exploited or not.

A pro-active website maintenance regime and professional webmastering that keep core applications and plugins up to date is essential for any website and while we can’t claim that we’ve never had a website exploited, the measures we incorporate ensure that these incidences are rare and recovery able to be performed quickly and painlessly.

If anything WordPress Sucks: Impress Search Engines With These Alternatives is ample proof that there is still no shortage of SEO practitioners and websites owners who will shamelessly make unsubstantiated, unconfirmed statements in an attempt to generate website traffic, and that the days of snake oil salesmen are far from over.