Website design has changed dramatically since the Mosaic web browser was introduced in 1993, with increasing amounts of bandwidth, more powerful computers, and increasingly sophisticated web browsers all contributing to increased functionality and design capabilities.

While not so long ago internet websites were created by programmers writing millions of lines of code, web development applications such as Adobe Dreamweaver, Microsoft’s Frontpage (since replaced by Microsoft Expression Web), and Apple’s iWeb allowed webpages to be designed and created using a graphical interface with minimal coding knowledge saw a flood of mostly poorly designed and functioning websites created as every home, community and organization jumped onto the the dot-com boom and racing to claim their piece of the new frontier called the “internet”.

Though these internet development applications make light work of website design, and creation, the results are very much like a stack of loose-leaf paper, with nothing binding the stack together apart from the code linking each page, in a similar manner to a piece of string threaded through ring-binder holes punched in the figurative stack of paper.

Building a website today without a CMS is a huge mistake

While there is without a doubt a need for hard-coded webpages, a better alternative for most small and medium size website designs is a content management system (CMS) such as that provided with WordPress, Joomla or Drupal. 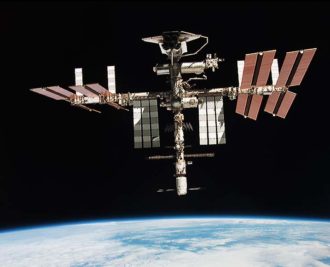 After numerous performance and feature enhancing "plug-ins" have been added - much like the way WordPress plug-ins work - the Ziraya module is vastly different. Photo: Courtesy NASA

Unlike the stack of loose-leaf paper analogy, a CMS is like the the Zarya control module of the ISS – compact, powerful and fully able to function by itself with power systems, plumbing systems and life-support systems. When Zarya control module of the ISS was placed into orbit in 1998 it was a robust, complete unit in much the same way as the core WordPress application is.

Today, as shown below, the Zarya control module is only a portion of the ISS, numerous modules having been added over the years to provide additional functions and features in much the same way as WordPress plug-ins enable the total customization of a WordPress CMS-based website.

The ease with which content can be changed to suit individual requirements using a CMS, as opposed to describing or drafting changes and then having a programmer hard code the changes means updating a website is something that can be achieved in minutes, as opposed to hours or days using conventional methods.

If building a website from scratch a CMS makes it much easier to create a complex business website and to upload, edit, manipulate and manage a wide range of content, including downloadable documents, video, embedded audio files and photographs.

A CMS can control how many times specific content is shown to any one visitor, control how the content interacts or connects with other parts of the website, manage imbedded advertising, and much more. 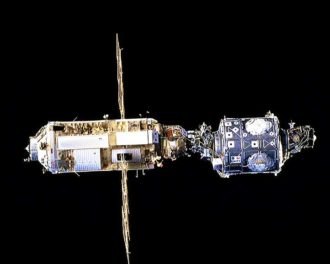 WordPress is similar to the Zarya control module of the ISS - powerful, compact, and fully able to function by itself. Photo: Courtesy NASA 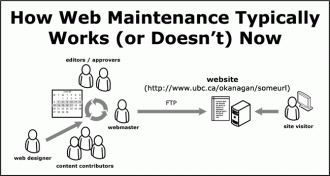 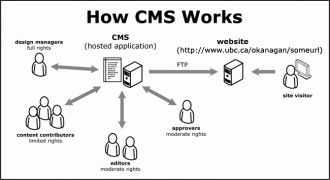 How a CMS such as WordPress works. Graphic: Courtesy the University of British Columbia

Though WordPress is widely known as a blogging platform, its powerful built-in CMS, easy to use back-end, and extensive global community of developers and users makes it an idle solution for everything from a fairly static information website, through to a full eCommerce solution.

Since it’s launch in 2003 WordPress has grown to power more than 20 million websites on the free-hosted WordPress.com platform, while hundreds of thousands of websites globally are using WordPress as a CMS system to present what appears to be a “traditional” looking website to visitors.
Just like Joomla or Drupal, WordPress is free software, with a legion of volunteers collaborating to keep each of the three programs up to date with the latest web developments, and thousands more writing plug-ins (See: Our favorite WordPress plug-ins) and widgets to expand its functionality.

This large global pool of developers breaks the reliance on those who use proprietary website development methods, while the simple back-end interface means in the majority of instance most website owners can update their own websites without the need for highly skilled HTML, PHP or CSS coders.

Another advantage of a CMS such as WordPress is that unlike web development applications which reside on your computer, WordPress is web-based, allowing you to update or change your website from anywhere in the world that you have internet access.

There are literally thousands of pre-designed templates available for all three CMSs – WordPress, Joomla and Drupal – meaning your website can be as unique as you want it to be for visitors, while maintaining the simplified back-end delivered by a professionally developed and integrated CMS.

In short, given the increasing levels of functionality and functions capable of being incorporated into websites these days, any small or medium sized business that today builds a website that is not based on a reliable CMS such as WordPress, Joomla or Drupal is making a big mistake.